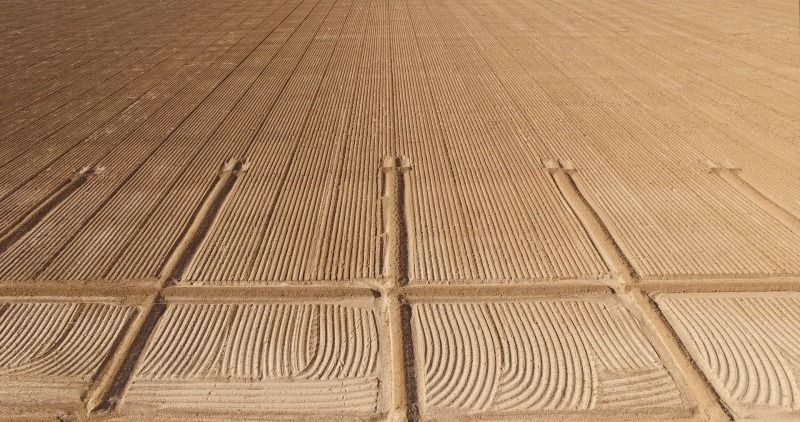 The video you are looking for is no longer available.
The Imperial Valley represents one of California´s most important regions of industrial agriculture. Corporate agricultural production interests have been able to successfully cultivate and exploit this geological part of the Sonora desert through a gigantic irrigation system fed by the Colorado River, as well as the All-American Canal specifically engineered for this purpose and which attained sad notoriety through the Mexican migration movement. The system´s run-off flows through pipes, pumps and canals leading to the Salton Sea, an artificial lake that is approaching ecological as well as economic disaster, just as bordering regions of Mexico.  With Imperial Valley (cultivated run-off) Lukas Marxt approaches this problem in a very ingenious way. He begins with a bird´s eye view of an irrigation canal coursing through a desert landscape. A drone camera flies the length of the canal, subsequently flying over Imperial Valley landscapes from the same perspective. Initially appearing as nothing more than spectacular documents of agricultural monocultures, the shots become increasingly abstract – additionally heightened through the accompaniment of an electronic score. Is this an actual or artificially simulated landscape? This ambiguity is precisely the point: The Imperial Valley is becoming the "Uncanny Valley", a place that is not yet or no longer natural and thereby appears eerie. A landscape post landscape (or its medial representation) is a geometric concept of lines, surfaces, points and color spots, regardless whether of an animate or lifeless nature. Although manmade, it is not a place for people anymore, neither ontologically nor in reality.