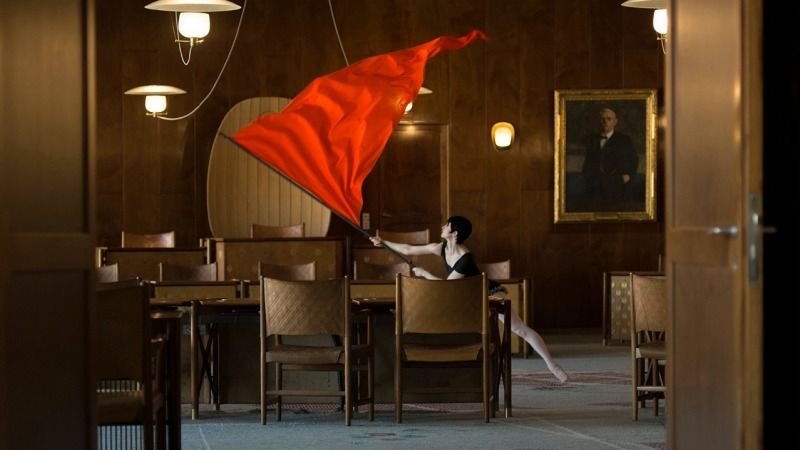 The video you are looking for is no longer available.
NADA: Act II restages Béla Bartók’s pantomime ballet The Miraculous Mandarin – as performed inside the Yugoslav Pavilion at the Brussels EXPO in 1958 with its scope to represent the country’s new aesthetic and ideological direction. The ballet score is here traced through scarce archives and is overwritten with new purpose in collaboration with the choreographer Lea Anderson. The Miraculous Mandarin constituted a peculiar choice for the national presentation given its scandalous reputation owing to its prurient narrative: three pimps make use of a prostitute to lure men into a room with the intention of robbing them. Bartók’s original characters – the pimps, prostitute and exotic Mandarin – are replaced with the archetypes of politicians, the ideal of Mother Nation, and that most easily abused of Modern practitioners: the Architect. In doing so, the ballet becomes an allegorical proposition through which to view European history: the thugs cast as the state’s bureaucrats and politicans, who deceive and enslave, destroying the desires of those who produce for the benefit of the nation or artistic idealism. Shot in the iconic Arne Jacobsen’s Aarhus City Hall NADA: Act II links across time and space various European models of statecraft, soft power and its framing.
Single channel HD video
Courtesy of the artist
Co-commissioned by European Capital of Culture Aarhus 2017, BALTIC Centre for Contemporary Art Gateshead and supported by Arts Council England, Northern Film School at Leeds Beckett University and Waddington Studios London.