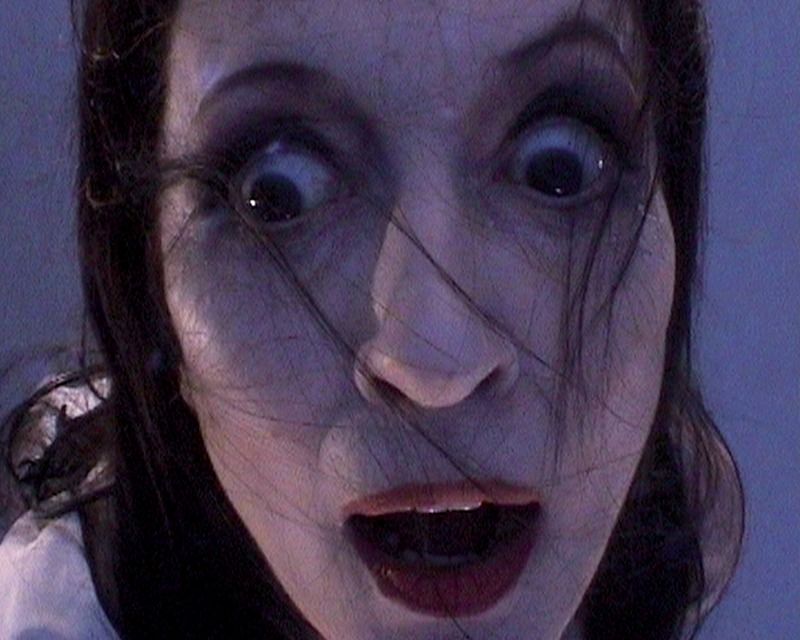 The video you are looking for is no longer available.
Katarzyna Kozyra
FACES

Katarzyna Kozyra’s work Faces is another work which shows her fascination with ballet. The close-ups of the dancers’ faces demonstrate extreme emotions: above all, intense concentration, tension, and equally intense effort. Clenched mouths, rapidly moving eyeballs, frowning foreheads with trickles of sweat. The distorted faces turn into masks. Those are the faces of dancers: classical ones, modern ones, hip-hop dancers, captured doing their showpiece performances. In this split-screen version of the work, the dancers’ faces are synched with the coresponding movement of their bodies, with which they express themselves, which are their instruments. And yet the faces, which during performances are virtually invisible to viewers, here steal the limelight and become the central point of attention. Just as in The Rite of Spring it is dance itself that is being deconstructed, separated into individual movements and frames in a process of tedious animation and then assembled together again, so in Faces the actor's body is deconstructed. Until now a single whole, it becomes auxiliary to its lesser seen part. . Confronted with the overbearing faces, the viewer can watch them, while being watched him/herself.

With the support of: Opera Theater - Rome, Teatr Wielki - Warsaw, Polish Institute in Paris, Polish Institute in Rome, Staats Oper Unter den Linden - Berlin, State Opera Ballet de Bordeaux, Hauptstadtkulturfonds, Teatr Rozmaitosci.
Featured dancers:
1.    Eri Nakamura and Piotr Czubowicz
Eri Nakamura – born in Japan. In 2002 she graduated from The Australian Ballet School in Melbourne. During the years 2003-2007 she danced with Victor Ullate Ballet Company in Madrid and later, from 2007 to 2008, with Les Grands Ballet Canadiens de Montreal in Canada, under the artistic direction of Gradimir Pankov. Eri Danced with Batsheva between 2011-2015 and designed the costumes for "Last Work", "And Still" by Danielle Agami, "Yag" and "Venezuela".

Piotr Czubowicz - Polish dancer and choreographer. A graduate of the Secondary Ballet School in Warsaw, who made his debut as a dancer at the Grand Theater in Warsaw. He worked in dance companies in Madrid and Monaco as soloists. His choreographies were enthusiastically received in Monte Carlo and beyond. Currently, he is a teacher at the Neoclassica Ballet Center and the Warsaw Ballet Academy

3.    Richard Move
American choreographer, dancer, performing artist, director, and filmmaker. They are the Artistic Director of MoveOpolis! and Move- It! Productions. Move is Assistant Arts Professor at New York University in the Tisch School of the Arts’ Department of Dance. In 2014 – 2019, Move served as Assistant Professor of Dance in the Department of Drama, Theatre and Dance at Queens College, CUNY and in 2012-2014, as Lecturer in Design at Yale School of Drama.

4.    Marie-Claude Pietragalla
French dancer and choreographer. Danced at the Opera Bastille the "Swan Lake” and "Les Variations d'Ulysse" under the direction of Jean-Claude Gallotta. In 1998 she received the Prix Benois de la Danse. In 2000 she appeared in a one-woman show "Don't look back", a solo performance created for her by Carolyn Carlson. In October that year she introduced the ballet Sakountala that evokes the internal struggle of the sculptor Camille Claudel with her own demons. In 1998-2003 she was the artistic director of Bellet National de Marseilles. Since 2004 she has run her own company, the Pietragalla Company.
Dance: Remember (2005) / Choreography: Marie-Claude Pietragalla / Duration: 1m53s
Cameraman: Pacal Minet

5.    Nelisiwe Xaba
Born in South Africa. A celebrated contemporary dance choreographer whose multi-media projects tour extensively and have brought her international acclaim. She collaborates with artists in and outside of her medium. Her body of work is politically driven and challenges stereotypes of the black female body and cultural notions of gender mainstreams. A performance by Xaba formed part of Imaginary Fact – Contemporary South African Art and the Archive at the South African pavilion exhibition at the 2015 Venice Biennale.
Choreography: Nelisiwe Xaba / Duration: 2m55s
Cameraman: Pasqual Minet

6.    Carla Fracci
Italian ballet dancer, actress and ballet director. Considered one of the greatest ballerinas of the 20th century, she was a leading dancer of La Scala Theatre Ballet in Milan, then worked freelance with international companies including the Royal Ballet London, Stuttgart Ballet and American Ballet Theater. Fracci is known for her interpretation of leading characters in several Romantic ballets, such as La Sylphide, Giselle, Swan Lake and Romeo and Juliet. She directed several ballet companies in Italy, including at the Teatro Sna Carlo in Naples and the Teatro dell’Opera di Roma.
Dance: Isadora / Choreography: Maurice Béjart (1976) / Duration: 3m38s
Cameraman: Fabrizio Bracci / Shot at the Baths of Caracala, Rome

7.    Nazareth Panadero
born in Spain. Dancer in the Tanztheater Wuppertal from 1979 to 2021 and now continue to dance as a guest of the theater. She was involved in the development of 19 pieces by Pina Bausch. In 2000, she was awarded the Andorra Award and in 2014 received the Premio Nacional de Danza from the King of Spain. In 2019, she was awarded the Medalla de Oro de Bellas Artes, one of the highest honours in Spain.
Choreography: Pina Bausch / Duration: 2m26s
Cameraman: Isabel Spengler / Shot at Hebbel am Ufer, Berlin